As part of an ongoing partnership between UBC Okanagan and GE Water & Process Technologies, a Proof Not Promises Award was presented to the Geothermal Facility as recognition of a joint project that realized a reduction of corrosion rate in the District Energy geothermal loop by 92%.  This has greatly improved the life expectancy of the piping and heat exchanger surfaces, resulting in a much healthier system.

As part of a continuous corrosion monitoring, GE Water tested the DES geothermal loop for Sulfate Reducing Bacteria (SRB’s).  SRB’s were found to be present in the loop and contributing to possible fouled heat exchange surfaces as well as localized corrosion.  The solution was to add a non-oxidizing biocide to the closed loop at regular intervals to impede SRB growth.  After implementation, mild steel corrosion had dropped by 92% indicating a much healthier and long lasting system.  The reduction of corrosion and growth within the heat transfer surfaces has resulted in increased heating and cooling capacity of the district energy system.  This has deferred capital expenditure in cooling tower infrastructure. 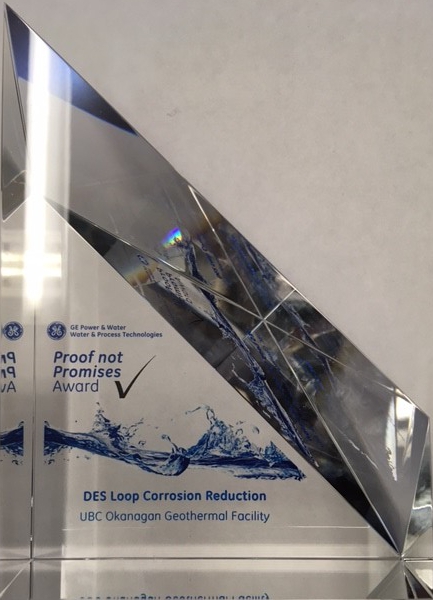 Who we are: Quicklinks